New perspective of collaboration in the fields of tourism and culture between Brazil and South Aegean Region is opening after the recent visit of the Ambassador of the Federative Republic of Brazil in Greece Mr. Cesario Melantonio Neto, to Mykonos and Delos islands.

Ambassador of the Hellenic-American Chamber of Commerce in New York Mr. Kostas Skagias and Honorary Consul of Brazil in Cyclades Mr. Nikos Papoudos were also present to the meeting.

Vice-Governor prioritized the possibility of twinning as the two regions share common characteristics. Santa Katarina is a significant tourism attraction in Brazil for VIP and celebrities from all over the world.

Vice-Governor Mr. Brigos stated after the meeting: «The main principles of friendship, cooperation and raising mutual awareness between the two peoples may apply to a wide range of fields with multiple benefits for the Prefecture and the Municipalities. The participation of institutions and citizens of our regions is necessary to achieve a long-term cooperation. Certain actions and collaborations in the fields of tourism, culture and arts as well as mutual cooperation among social services, tackling with common problems and adoption of common objectives may lead to genuine development for our communities.”

The Vice-Governor, also, stated to Tourism Press that further development and strengthening of the relationships between South Aegean Region and Brazil will open up new perspectives.

Prior to Brazilian Ambassador’s visit to Mykonos and Santorini islands many other actions have been initiated by South Aegean Region aiming to penetrate the most significant and dynamic market of Latin America. The Vice-Governor had visited a month and a half ago local government of Santa Katarina where suggested the twinning of the two regions. He also accepted the invitation to participate to the celebration of National Brazilian Day, 5th of September in Brazilian Embassy in Athens while the Embassy participated in gastronomy festival of Tselemente in Sifnos island.

Ambassador of the Hellenic – American Chamber of Commerce in New York Mr Kostas Skagias stated: “Our target is to provide the appropriate conditions for new collaborations to be developed, to penetrate new unexploited markets. Brazil, the strongest economy in Latin America has long – term friendship relations with Mykonos and Santorini islands.» 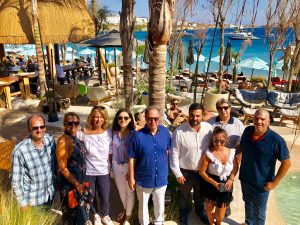