Director of GNTO France: “Greece is the first destination for the French holidays”

According to the director of GNTO France, Mrs. Dimitra Voziki, the French preferred Greece for their summer vacations this year.

Mrs. Voziki, in a meeting she had with Mr. Kostas Skagias, the Ambassador of Mykonos representing the HACC New York, particularly emphasized the French preference for our country, stating characteristically: “Despite the special conditions of this season, the French chose Greece again this year, making it the first destination for their summer vacation abroad. The strong brand that our country has established in recent years in the tourist market of France, as a result of the systematic work of the French GNTO Service, is yielding more and more fruits.”

This development is particularly positive, as the French are one of the main traditional markets for inbound tourism for our country, along with Germany and the United Kingdom. At the same time, it is a key common goal for the luxury tourism product provided by our country, as according to the annual Wealth Report of Knight Frank for 2020, France is ranked fourth with the most affluent (HNWIs) in the world.

plans and implements, every year, actions related to attracting a high level of French tourists. “Having created a strong list of recipients, in recent years, from our participation in the top exhibitions as co-exhibitors at the GNTO stand, we continue to maintain contact and on the other hand to actively promote our members through newsletters and social media,” Kostas Skagias who he is also responsible for the implementation of the program, stated during the meeting. 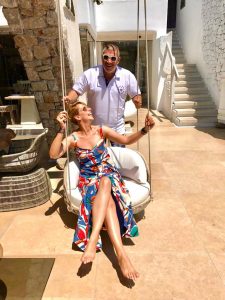